It is evident from Elvis Presley’s actions on and off stage that his first love was gospel music. In March 1960, Elvis was asked what his favorite style of music was and he responded “spiritual music… I know practically every religious song that’s ever been written.”

By the end of 1956, Elvis had just finished a streak of 16 consecutive weeks at number one with “Don’t Be Cruel/Hound Dog” and then “Love Me Tender.” So why would Presley’s record company, RCA, and shrewd business manager, Colonel Parker, allow “The King of Rock and Roll” to veer off in another musical direction to sing a gospel song on national television and possibly risk alienating his fanbase?

The answer is simple — because Elvis insisted. Presley’s mother, Gladys, loved gospel music. Elvis decided he would sing one of his mother’s favorite songs, “Peace in the Valley,” on his third and final appearance on The Ed Sullivan Show on January 6, 1957.

The show’s producers did not want Elvis to sing a gospel song on national television, but Elvis insisted: “No, I told my mother that I was going to do ‘Peace in the Valley’ for her, and I’m going to do it,” he said. Ed Sullivan supported Presley’s decision.

That night Elvis performed seven songs including “Hound Dog,” “Heartbreak Hotel” and “Don’t Be Cruel.” At the very end of the show, Presley backed by The Jordanaires, sang “Peace in the Valley.” Ed Sullivan introduced the song describing Presley’s plea for people to donate to the charitable cause of Hungarian refugee relief. In a subtle attempt to explain Presley’s choice to sing a gospel song, Sullivan said Elvis was going to “sing a song he feels that this is sort of in the mood that he’d like to create.”

The network’s hesitation with Elvis singing gospel was proven wrong when the public reacted positively to the performance. One writer hailed Presley’s appearance on the Sullivan show as “terrific” and attacked critics by comparing Elvis’ roots in American culture to that of Will Rogers and Carl Sandburg. 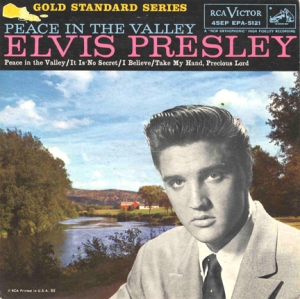 The positive response prompted RCA to support a four-song gospel EP called Peace in the Valley which was released a few months later in April. The Peace in the Valley EP surprised everyone by initially selling over half a million copies (and ultimately going Platinum), prompting RCA to encourage Elvis to do his first gospel album a few years later.

Elvis would go on to record three gospel albums during his career. Ironically, the only GRAMMY awards The King of Rock and Roll ever won were for his gospel recordings.

For more fascinating Elvis Presley facts, check out the author’s book, ELVIS: Behind The Legend: Startling Truths About The King of Rock and Roll’s Life, Loves, Films and Music